I felt so blessed. I looked out into the faces of so many people that meant so much to me and had each had a hand in who I had become and who I was becoming. Friends from every sector of my life. Through tears, I shared with them how much they each meant to me and how much I appreciated them. I have always been the guy that had too many words, so I got to a point where I knew it was time to compose myself, put the mic down and return to my seat.

I sat down. Then one by one, about twenty or so friends of mine came up and affirmed me and sent me off with their warm words, prayers and one last hug. 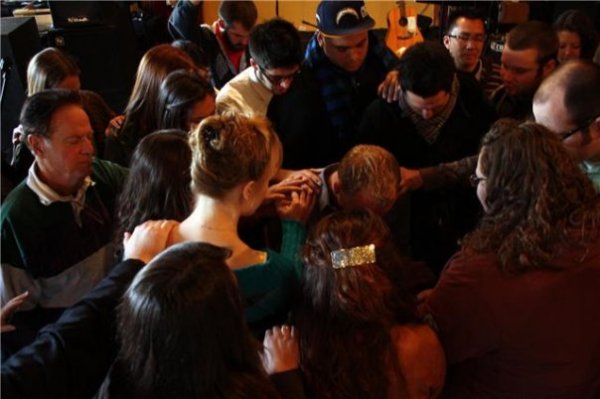 A week later, I boarded a plane and left California, the only home I’d truly known. My eyes were fixed on Tanzania and a life that I couldn’t have expected.

Hard to believe that that was two and a half years ago now. So much has happened since then and I know that I’m not the same person.

I settled into Tanzania and soon the romantic aspect of living there lost its veneer. Frustrations began to set in that are all too common from living in a foreign, third-world country trying to do ministry. And as I returned to my single bedroom guest house night after night, a very real feeling and realization came upon me: I was alone.

I didn’t recognize my insecurity, because up to that point, I didn’t know what insecurity felt like. I joked about the spot I was in. Haha, the only single guy missionary here. Haha, living alone in the back of some Dutch family’s property, with whom I had little relationship. Haha, I only have one friend that emails me regularly. Haha. Like Ken Kesey wrote in One Flew Over the Cuckoo’s Nest, I had to laugh at the things that hurt me, it was the only thing that kept me from being driven plumb crazy.

I knew not what to do, but turn to a god of our times. Technology. I began writing regularly on a blog, linking it to my Facebook and sharing it with all my friends back in the states. I had to check it constantly, because I thirsted for recognition. Not merely of my writing, but that people would validate me and tell me I’m a good person. I wasn’t walking in the truth that only God can validate me. I was also finding out the hard way that connecting online is not equivalent to sitting down for coffee or taking a walk with a friend.

As bad as that was, it was only intensified by getting stuck in my head without other people telling me I was off. I had one friend that regularly spoke into my life, Ryan. He’s twelve years older than me and has four kids, but he was the only person that was walking with me. Outside of him, I was floating around in my head most days with thoughts that just shouldn’t have been there.

The year went on and some amazing things happened in the summer, not the least of which, getting engaged to an amazing woman that I hardly knew. Our engagement was followed two days later with her getting on a plane to go back to the states and me being alone again. Ryan too left the next month and I was trapped.

Insecurity came to a head. I felt the Lord tugging on my heart and as the loneliness and friendless-ness settled in in full-force, I decided to take a three week break from writing on my substitute-friend (the blog), affectionately known to blog followers as blog suicide.

I cringed on the inside, my skin was a couple sizes too big and my anxious nerves couldn’t fill it. The only thoughts in my head were my own, which only perpetuated the vanity of my loneliness. I wanted to turn to someone and let them know how I was feeling, but that was not a possibility, because it was precisely the problem. Alone. This is the way it feels.

In so many ways, I feel as though I never settled those feelings. I would soon go on a furlough in the states to marry my bride and saw friends from what seemed like a previous life. It was great to see them, but I felt like I wasn’t able to relate to them like I used to. They were great, still are, but now I’m different and I feel as though I don’t have a place. Jesus, help me.

Yet above all, I choose to believe, eyes open that my place is with the Lord, with my wonderful wife, Melissa and the only home I can have is in His will. The home in His will always involves community and friends and I’m believing Him for that, for me and my family, as we once again find ourselves here for another stint in the states.

If you made it to the bottom of this post. Do yourself a great big service and step out to make new friends and deepen the friendships that you have. We were meant to share in this life together.

Welcome to Build This Kingdom

I'm Brandon. I've been married to my beautiful bride Melissa since 2011 and together we're raising three world-changers (Moses, Promise and Shepherd) in Moshi, Tanzania. I'm the director of Kingdom Families, a family-based orphan care program advocating for orphans and assisting families to welcome them into their homes as sons and daughters. I drink my coffee black, bleed Dodger blue and I can see Mt. Kilimanjaro from my dining room table.